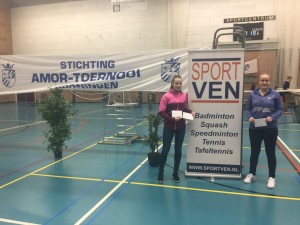 Last month february I played a couple of different tournaments. On the 4th of February I played the Fz Forza 468 Smash Hoogeveen. In the mixed together with Robin Mesman, we managed to win the first match, but sadly we lost the second. In the doubles together with Nienke Kwakkenbos we first played in a poule. After we won the poule, we went straight through to the finales which we also won.

Last weekend I played the 51e Amor tournament at Groningen.  The third one this month and also a senior tournament. In the doubles together with Nienke, I played two matches on Saturday and a semi-finales and a finale on Sunday. We won the first price, which became the second first prices we won together this month. In the singles I played two matches against two seniors on Saturday, which I both won. On Sunday I had to play the semi-finale against another youth player. I won which brought me to the finales in which I again had to play against a youth player. I managed to win the finales and got the first price. With these two prices added to my other victories, it was a successful month.